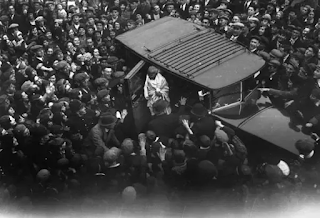 Similarities between Gandhi and Hitler.

Gandhi was a vegetarian, So was Adolf Hitler.

Gandhi believed vegetarianism was a part of his commitment to ahimsa, the cornerstone of his politics. Eating meat meant doing violence to animals, who, he believed, had spirits and souls.

Hitler identified himself as a strict vegetarian .Hitler was a vegetarian because of his concern for animal suffering, noting that he was often distressed by images of animal cruelty and sufferings.

Hitler once said -“One thing I can predict to eaters of meat: the world of the future will be vegetarian.”

Image- Gandhi having some food with several others

Image- Hitler having some food with his fellow Nazi’s

Gandhi died due to gunshot’s from his assassin ,Hitler too died by gun (suicide).

Gandhi died on 30 January 1948 in New Delhi assassinated by Nathuram Godse, 3 years after the death of Hitler.

They both died on the same decade.

Gandhi was against the ill treatment done on animals. Gandhi said that “The greatness of a nation and its moral progress can be judged by the way its animals are treated.”

Nazi Germany under Germany was the first state in the world to place the wolf under protection. Hitler is said to have loved his dog Blondi more than his mistress Eva Braun.

Hitler and his love for animals.

Gandhi read a lot of book’s and he himself as authored some too.

Hitler too read ton’s of books. In 1945 the Allied found around 16,000 which were thought to be Hitler’s property.

Image- Hitler at his Library.

But one went on to be regarded as the greatest human being to have ever lived.

While the other went on to become one of the most cruel human being of all time.