Gandhi is the one of the most influential person of the last century.

Surely the books he have read would have influenced in some manner.
Gandhi is said to have read tons of books during his lifetime,While we cant include all the books he read in his entire lifetime,we can do the same in parts of 10 books each.
Here are 10 books read by Gandhi, and maybe you should too-

A tale of 2 cities was written by Charles Dickens.

A Tale of Two Cities is an 1859 historical novel by Charles Dickens, set in London and Paris before and during the French Revolution. The novel tells the story of the French Doctor Manette, his 18-year-long imprisonment in the Bastille in Paris and his release to live in London with his daughter Lucie, whom he had never met. The story is set against the conditions that led up to the French Revolution and the Reign of Terror

Gandhi is said to have liked the writing style of charles dickens and also liked the book.

Buy the book here-A Tale Of Two Cities at a low price.

2. THE TRIAL AND DEATH OF SOCRATES-

Written during the ancient times by Plato,Gandhi paraphrased the work as: ‘Story of A Soldier of Truth’ and published it in his newspaper Indian Opinion, and even translated it into Gujarati.

3.THE KINGDOM OF GOD IS WITHIN YOU.

Banned in Russia, Tolstoy’s The Kingdom of God Is Within You was deemed a threat to church and state. The culmination of a lifetime’s thought, it espouses a commitment to Jesus’s message of turning the other cheek.

Buy the book here-THE KINGDOM OF GOD IS WITHIN YOU

.Daniel Defoe relates the tale of an English sailor marooned on a desert island for nearly three decades. An ordinary man struggling to survive in extraordinary circumstances, Robinson Crusoe wrestles with fate and the nature of God.

Buy the book here-ROBINSON CRUSOE AT A LOW PRICE

Victor Hugo’s tale of injustice, heroism and love follows the fortunes of Jean Valjean, an escaped convict  determined to put his criminal past behind him.

6.India:What Can it Teach Us?

Written by
F. Max Müller,
This work has been selected by scholars as being culturally important, and is part of the knowledge base of civilization as we know it.
Buy the book here-India:What Can it teach us?
7.The Jungle Book.
This came as a surprise to me that Gandhi read the jungle book. Maybe the book is the reason for his young and childish behaviour. The Jungle Book by Rudyard Kipling features Mowgli, a boy raised by wolves and Sher Khan, biggest tiger in India.
Buy the book here-The Jungle book at a low price.
8.Glimpses of World History.
On New Year’s Day, 1931, Jawaharlal Nehru began a remarkable series of letters on the history of the world to his daughter, Indira, then, thirteen years old. Over the next thirty months, Nehru wrote nearly two hundred letters in this series, which were later published as Glimpses of World History.
Buy the book here-Glimpses of World History
9.Gospel Of Buddha.
this volume on Buddhist philosophy describes Buddhist doctrines and retells the events of Buddha’s life. Carus relates ancient beliefs and practices to the living present and to the spiritual needs of our time.
Buy the book here-Gospel Of Buddha
10.Bhagvad Gita
The book that had the most influence on Gandhi.The book that made Gandhi “The Mahatma”
Two teachings of the Bhagwad Gita appealed most to Gandhiji. The first one was anasakti, non-attachment, to the fruits of one’s actions, “Your business is with the action only; never with its fruits.”
The second teaching was that of attaining the exalted state of sthitaprajna, elaborated in 19 verses, that he read at the age of 18, in England. For him, these 19 verses represented the gist of the entire Gita. The yogin who has succeeded in freeing his mind from all attachment to objects of senses, is devoid of all fear and remains calm and composed even in adverse situations.
Buy the book here-Bhagvad Gita according to gandhi 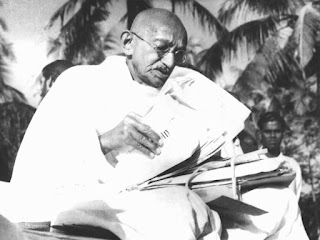