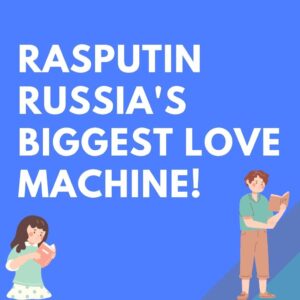 There lived a certain man in Russia long ago

He was big and strong, in his eyes a flaming glow
Most people looked at him with terror and with fear
But to Moscow chicks he was such a lovely dear
He could preach the Bible like a preacher
Full of ecstasy and fire
But he also was the kind of teacher
Women would desire
Ra ra Rasputin
Lover of the Russian queen
There was a cat that really was gone
Ra ra Rasputin
Russia’s greatest love machine
It was a shame how he carried on

The above lyrics got so famous on tik-tok,But do we really know who Grigori rasputin a.k.a Rasputin the Love Machine is? 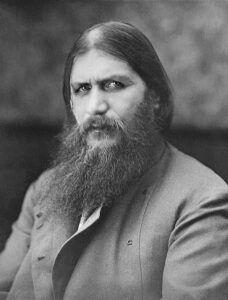 THE ORIGIN OF RASPUTIN A.K.A THE LOVE MACHINE

Rasputin the love machine was born in Siberia in 1869 to a peasant family.

Later on in his life Rasputin was inspired by the monks and soon Rasputin became one. On his travels he visited a lot of places and the natives of the places Rasputin visited used to be mesmerized by Rasputin’s magical presence.

But Rasputin the love machine was simply a thief and an alcoholic.

As written earlier, people were often mesmerized by Rasputin’s personality and his looks so much that he finally found a place in St. Petersburg where Rasputin used his charisma to find a place in the palace.

The Russian Tsar Nicholas II and his wife Alexandra were orthodox Christians. They both were also superstitious and believed in mysticism.

Hence it was easier for Rasputin to find a top spot in the palace.

Rasputin the Love Machine cemented his place in the top because of one incident. Two things caused headaches to the palace- One was the crippling monarchy. The Tsar knew that the monarchy could be replaced by the revolutionaries if he was not careful.

The other problem he faced was with his son, who also was next in line for the throne-Alexia.

Alexia had contracted a disease named hemophilia and was being treated by the doctors day in and out. But Rasputin who was already in a good spot in the palace advised the Tsar to reject the medicine used to treat Alexia. The Tsar obliged and soon the doctors were removed.

After a few days Alexia showed some considerable Improvement in his health and everyone thought it was due to the advice of Rasputin along with his magical powers that cured Alexia.

But recent studies and findings showed that the doctors at that time used aspirin on hemophilia patients which actually increased the chances of death in hemophilia patients. Hence, The reason Alexia got cured was because Aspirin treatment was stopped.

But people at that time credited it to Rasputin’s Mysterious powers.

Rasputin also made a prophecy later in which he said that if he was killed, Alexia would die and the monarchy would be dead.

Soon Rasputin reached a high point where it was almost impossible to remove him from the palace.

This caused both support and distress by the citizens.

Rasputin was well received by the poor peasants as they felt they came from him, While the nobilities hated him for his more-than-necessary influence in the palace.

THE PLOT TO KILL RASPUTIN

Felix Yusopov was one of the people who despised Rasputin and wanted to assassinate him and started making plans to kill Rasputin.

Some attempts done to assassinate him already failed. One was when Felix Yusopov stuffed cyanide into some pastries which were to be eaten by Rasputin.

But one of the co-helpers of Felix Yusopov had a change of heart and replaced the cyanide with some harmless material.

When Felix Yusopov saw Rasputin relishing the pastries without any sense of uneasiness, Felix Yusopov got desperate and took out his gun and shot Rasputin at point blank.

Yet Rasputin recovered, hit all the people around him and ran off. Soon Felix Yusopov and his team hunted Rasputin down, Shot him and threw his body in the Neva river.

Just as Rasputin prophesied ,The Tsar lost his throne and his son never became a king. Monarchy got crushed by the revolution.

But was it due to Rasputin the love machines prophecy or was it because of the long political battle by the monarchy and the revolutionaries?

We may never know!

Grigori Rasputin is a popular person, the Russian Mystic and the close aide of the Tsarina Alexandra, who believed that Rasputin could cure her son. Which he kind of did but nobody knew how. With that Rasputin had the royalty in his hand.

Tsar Nicholas never went against his wife’s wishes. So when she insisted on taking advice from Rasputin, Tsar did so.

And that led to the inexperienced Tsar leading the weak Russia into the WW1.

When the Tsar was away it was Rasputin who ran the country, he dismissed all the nobility and appointed people close to him.

It made the public hate the royalty even more, who was already losing power. Rasputin just sped up the whole Russian revolution and the rise of the Bolsheviks.

Read about the most cruel Nazi here-THE ANGEL OF DEATH

Rasputin was shot dead on December 30 1916. After his death the revolutionaries dethroned the royals and expelled them to Siberia where they were eventually killed.

The weakened economy of Russia after the war was one of the main reasons for the revolution had not Russia lost the war or was having a good economy things would have been different.