Many still consider Gandhi only cared for Indians.

Gandhi actually cared for everyone.

Gandhi was the one who lead the Non-Cooperation and Civil Disobedience Movement.

During This time huge heaps of clothes manufactured by Brithisher’s were burned.

And Lanchshire was the site of the world’s premier cotton-goods industry. The weaving towns of the region had flourished through trade aided by British Empire ensuring a ready supply of cheap, raw cotton.

Hence Gandhi went to Britain to visit the mills and apologize to the workers.

The British Weavers never let him Apologize and actually supported the boycott of British woven clothes.

A crowd numbering three to four thousand people assembled at Darwen Station … when the train was heard to be entering the station, there was babel of eager voices, and every eye was focused on the station exit, but hopes were quickly dashed to the ground and the crowd was greatly disappointed when the first passenger to see the gathering shouted, “You all can go home. He got off at Spring Vale”. 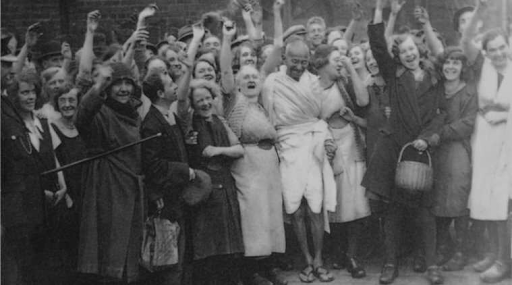 Image- Gandhi Jayanti 2018: “‘Three cheers for Mr Gandeye, hip, hip … Hurrah!’, shouted the crowd, and then again and once more, for the third and loudest time…”

Watch this beautiful video where Gandhi meets the British workers-

Gandhi is not only for India a hero of national history, whose legendary memory will be enshrined in the millennial epoch. -Gandhi has renewed, for all the peoples of the West, the message of their Christ, forgotten or betrayed.-Romain Rolland

Gandhi cared for everyone.

He is the greatest human being of the 21st Century. 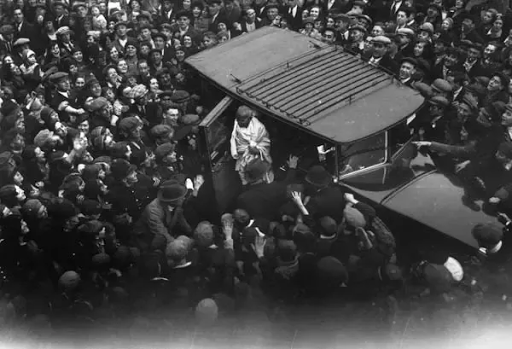 2 replies on “The Greatest Human Being Of the 20th Century”