You can now also listen to this article on Spotify above! 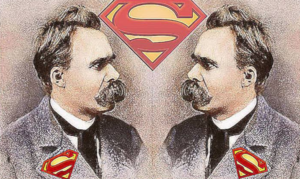 You can take Nazism out of Neitczhe, but you can never take Neitczhe out of Nazism.

It isn’t that surprising that the German philosopher influenced the Nazis because he has influenced the whole world but none more than the Nazis, who believed that the Aryan race was the Ubermensch described by Neitczhe.

He wasn’t even a nihilist as many believe him to be. He merely believed that Nihilism was a point in the journey to become the Ubermensch or the Supermen. 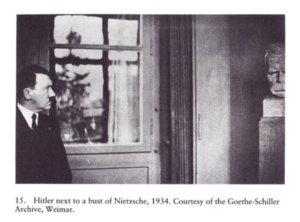 He believed that the men of the future would be able to make thier own morals and will not be controlled by dead ideals. His famous claim “God is dead” says that the people who have killed the god have broken their chains and have become higher beings. People who are aware of what was.

The Nazis in contradiction believed the very German people were the Ubermensch and thus wanted to create a world of their own “Supermen”.

It shows how a harmless philosophy can be bent into dogmas by individuals.

Neitczhe on the other hand died in solitude and become acknowledged only after his death. 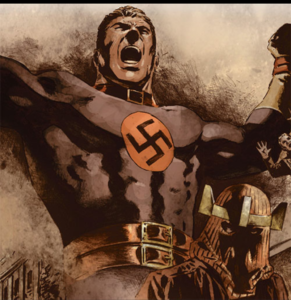 Image-Nazi Depiction of the “Ubermensch“

READ ABOUT GODWIN’S LAW AND HITLER

3 replies on “You can Never take Neitczhe out of Nazism”

Nietzsche died long before Hitler's reign, and it was partly Nietzsche's sister Elisabeth Förster-Nietzsche who manipulated her brother's words to accommodate the worldview of herself and her husband, Bernhard Förster, a prominent German nationalist and antisemite.
-Wikipedia

It was Elisabeth all along.