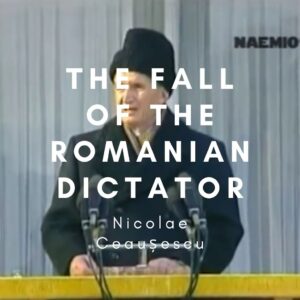 How a single second of action bought a communist dictatorship to an end.

Communism was an ideology which thrived for 80 long years until it started loosing its control from the late 1980’s.Communist regimes started crumbling one by one due to defective organization.

In the last few months of the decade, Berlin wall fell and countries where communism reigned for years such as Poland, Hungary, Czechoslovakia and Bulgaria were being swept by revolutions.

Nicolae Ceaușescu, The Communist Dictator of Romania knew that at this rate revolutions would soon hit his government. But he was confident that he could withstand the revolution. He didn’t even bother the riots against his government rule in The Romanian city of Timișoara on 17th December 1989.

To prove the Romanians and the rest of the world that majority of the population loved him (or feared him),He organized a mega rally and filled the Romanian City square with 80,000 people on 21st of December 1989.

All of Romanians were instructed to stop whatever they were doing at that time and tune into their televisions and radios to hear speech of Nicolae Ceaușescu.

The crowd which gathered were enthusiastic holding flags, with the usual placards that said “long live Ceausescu” and, “long live the Romanian Communist Party”

And Nicolae Ceaușescu at his building balcony started to give a riveting speech with “Dear Comrades and Friends…”(as he always did countless times before) and boasted on the greatness of Romanian socialism for a period of 8 minutes and the crowed clapped along to whatever he said.

And Immediately what followed simply changed the history of Romania.

Just as Nicolae Ceaușescu starts another sentence of his speech saying ‘I want to thank the initiators and organizers of this great event in Bucharest, considering it as a—-’

And suddenly Nicolae Ceaușescu becomes silent and freezes in shock and disbelief as you can see in the below image.

In a matter of one second his life changed.

Someone in the crowed booed.

And following that person another booed.

Within a matter of few seconds the entire masses of the people gathered at the city began booing and shouting and cursing abuse on Nicolae Ceaușescu.

And mind you this all happened in live Television ,The entire Romanian population heard and saw what was happening on Television and radios abusing him.

The Securiate -The secret police of the government ordered the live broadcast to be stopped immediately.

But the Television crews disobeyed.

They still recorded it live. Now all of Romania saw what was happening.

Nicolae Ceaușescu yelled “Hello Hello!”  acting as if it was the problem was with the mike in front of him.

HIs wife Elena ordered the population to shut up, But Nicolae Ceaușescu scolded her in front of live television ‘You be quiet’! and he appealed the crowed in the square “My comrades be quiet comrades….”

But they never did.

Nicolae Ceaușescu dominated the 20 million Romanians for years. All ended when a person booed and others followed him.

All because of that one second.(By the way no one knows who booed first, It still remains a mystery to this day.

After this speech Nicolae Ceaușescu ran away and was caught almost immediately and was executed 4 days later, still wearing the same clothes.

The main charge against him in the Trial was genocide—namely, murdering “over 60,000 people” during the revolution in Timișoara.

Full Video of the Last Speech before the fall