Godwin’s Law is an internet adage asserting that

In simple terms,”if you mention Adolf Hitler or Nazis within a discussion thread, you’ve automatically ended whatever discussion you were taking part in.”

As you can see in the above picture as the time of the internet discussion increases, The probability of a Hitler reference is very close to being fully possible!

The Godwin’s Law was formulated by the American attorney and author Mike Godwin in 1990.

Mike Godwin initially refered it to Usenet NewsGroup Discussions.(For those who don’t Know What Usernet is,It is simply a forum almost similar to reddit)

Fun Fact:In 2012,The Term “Godwin’s Law” was added to the Oxford Dictionary.

So,Is the Godwin’s Law True?,I found out Mike Godwin’s answer which was published on 2014,It was as Follows-

Although Godwin’s Law is framed as a probability statement, its purpose is to make people think twice before following the rhetorical line of least resistance and escalating their arguments to comparisons that trivialize the impact of the Nazis and the Holocaust. In short, its purpose is to trigger (insistently) a reader’s historical awareness and perspective, especially in contexts where perspective has otherwise been lost. So why frame it as a kind of statistical or natural law? Because the kinds of people who reflexively bring up Hitler or Nazis in order to trash the argument or opponent du jour hate to discover that they’re merely instantiating a lazy intellectual tendency so common that it seems like a natural law — they would rather think of themselves as free-willed, independent thinkers.

Below is a a chart which shows the probability of using a Hitler reference increases as the number of comments increases on any sub-reddit. 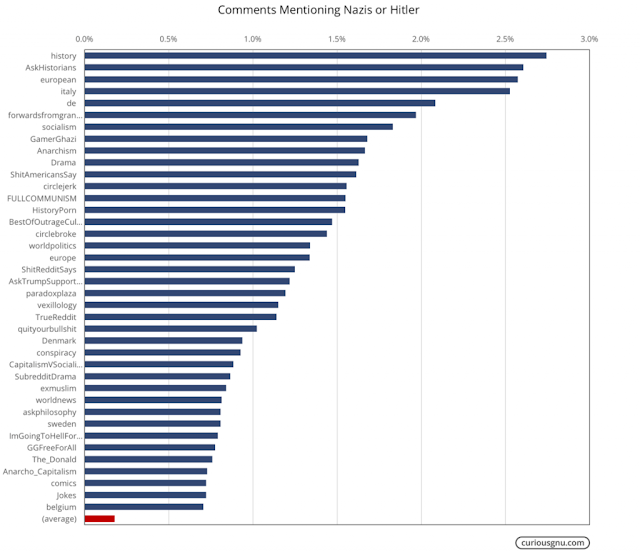 So the next time you see an internet discussion going way too long and deep expect a Hitler reference real soon!